Some months back, when I wrote the article on praying Mantis, I made a promise that my upcoming article would be about medieval paintings. Alas, I failed because, the next piece was “The Bus Fare”. However, I didn’t feel anything from inside, due to my failure to keep this promise. Perhaps this is a good omen, not being able to keep to promises is a salient attribute among Nigeria politicians- have I ever mentioned how rich Nigerian politicians are? (That is a story for another day). Not only did I not fail in the promise, I didn’t feel the need to explain myself to anyone as to why I had failed. Indeed, a top political office awaits me.

Anyway, I saw a notification on my credit card last weekend, indicating a debited amount for maintaining this domain. That was when it struck me, that I am paying for this site, and, the least I can do is be a bit more frequent in posting my writings, so I here I am. With the long overdue piece on the medieval paintings.

If one is to ask, to name some famous painters of all time; No doubt, legendary artisans such as Vincent van Gogh, Leonardo da Vinci, Pablo Picasso, Michelangelo, et cetera, will come to mind because of their various contributions. But mistake not! There are some paintings from same era that will completely change your orientation and confidence in the superiority of the human race (no insult intended, but you will soon get my point).

In this article, we will see some Paintings from medieval times that were quite famous then, and highly revered. The description of the intent and symbolism are clearly written in the art collections. Do you remember the origin of the myth about centaur?

The etymology of the Centaur goes back to ancient Greece when some greek first saw some englishmen riding on a horse and they depicted it as a whole animal, half-horse half-man. This was long before kings of Lapiths in greek mythology.

Let’s start with an easy one. Below is the painting of a frog, it was believed that the tongue of a frog placed on the head of a sleeping person would make them reveal their darkest secrets. 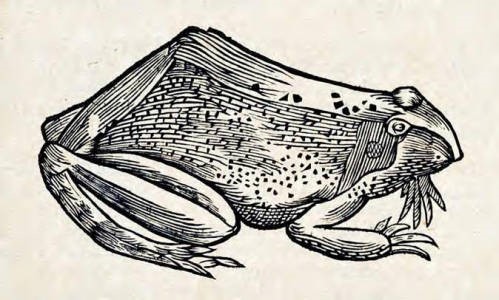 From the archives, it was also written that frogs dissolved in the winter, and reformed in the summer. And if this amphibian (or monster as the image seemed to suggest,) were to bite you, the only way to cure the venom would be to mix the blood of the sea turtle and cumin.

The next image will be a quiz. Please, identify animal below. 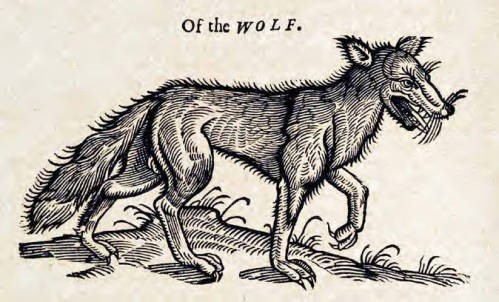 Yeap! The answer is right there; a wolf. The archives reported that brains of wolves increased and decreased with the phases of the moon. Also, that wolves were afraid of shrimps.

Next quiz, identify the animal from the image below:

I don’t care what your answer was, you are wrong! These are elephants. I don’t know exactly what they are sniffing on the floor, but my top guess is: they are looking for their trunks.

I should emphasize here, that, these drawings were not just any mere work of art. They were highly revered work for their “clear” depiction of Mother Nature. Most were done and presented to the kings of that time, by artists who travel the world and saw “new” animals and wished to share the experience. If you think those elephants were poorly drawn, then wait until I show you their cousins.

Without interfering with the love relationship between the Elephant and the Dragon, Draco (the dragon) seems too playful. Or the elephant is just not committed to the relationship. Who knows?

We are getting better, but again, look at the flowery ears of the elephant. I won’t complain much about the ears because of the next image.

So many things here, is that a castle? And the ears? – Adorable! 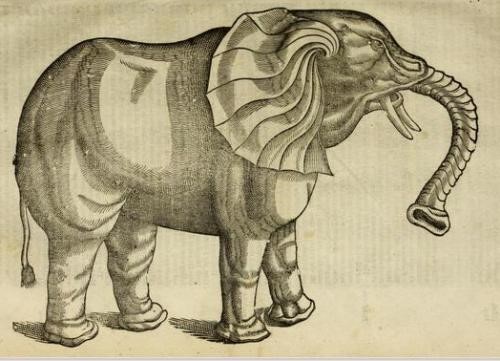 So far, this is the first artist to rightly depict the elephant tail. But he has bigger issues- is that a fish fin there?

Okay, now, I have my answer, that’s definitely a castle. What is happening here? What happened to the trunk? The ears? – No comments. But I like coy smile. It gives a vibe of accomplishment.

I have a question, how does the elephant eat? I am not going to talk about the legs. They are fine. So are the mushrooms.

Excerpts from the archives are quite helpful and informative, they describe what the reality was. But unfortunately, we don’t dare ask why. It explains the rivalry between Dragons and Elephants, and how dragons are completely useless in presence of water (their fire will be of no use). It was believed that elephants and dragons are arch nemesis, thus the constant battle. 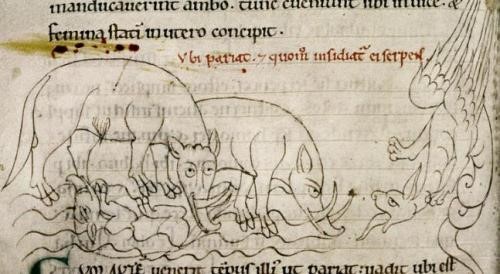 We find so many of such paintings, where the elephants seek refuge near some water and the dragons are not warped around them anymore. By the way, these guys are still sniffing around for their trunks.

This artist had lost his mind!

So had this artist too.

And this…. Check out the biceps though 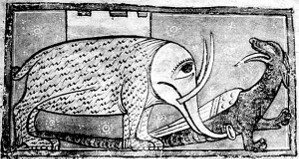 I would have passed this for a fish, a Tilapia perhaps… But, nope! it’s an elephant. We can agree at this point, that an elephant trunk seemed to be the biggest challenge for medieval artists. They tended to have widely varied perceptions on the how and whereabouts of the trunk. 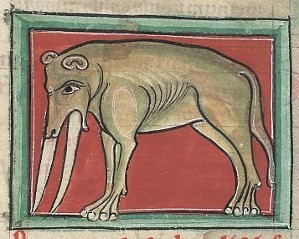 This guy has given up completely on the trunk.

No comments! I will leave you to judge this.

I have mixed feelings about this. Not only because I am bad at golf, but the nozzle on the trunk.

To be safe, these artists ignored the trunk completely.

I can honestly spend my whole time talking about the elephants, but he have to move on, I have other animals to show you.

The Ibex had been a famous animal as early as the 13th century. There are lots of drawings of ibexes, coupled with really weird beliefs about the animal too. It is always easy to distinguish an animal from the collections, mainly because the portraits are in harmony to certain beliefs, like the elephant-dragon rivalry, tigers ALWAYS staring at a mirror, griffins cradling their prey, and as for the ibex, well… It was believed that the animal’s horns were the strongest things ever, and it was never shy of demonstrating this feat. It jumped and lands on its horned. Let me just leave you to see the pictures.

Here is an Ibex

Here is another ibex showing strength as protective mechanism against a tiger. 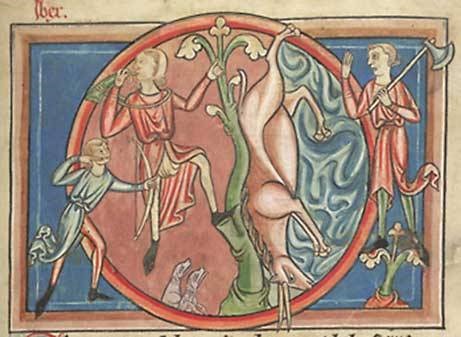 The people in this work of art, surrendered after the display of strength.

Back to our quiz, this time you get multiple choice question.

Which of the following is a crocodile? 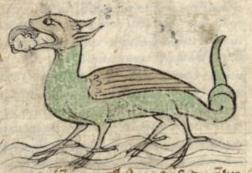 You have failed this quiz again. The answer is: “All of them”. A-E are all crocodiles. I find option D and E particularly disturbing. Artist E was feeling very fancy, and decided to throw in some wings. I guess other artists felt the vibe, and decided to jump on the bandwagon. See below 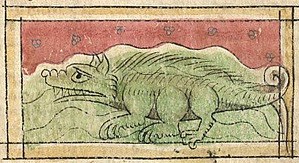 Also a crocodile. Honestly at this point, I was convinced these artists could basically draw anything and call it a crocodile, people would believe them. As expected, there were many beliefs about crocodiles too, but I will just mention one I find very… settling.

“Crocodiles are afraid of saffron, and country people often strew their bee hives with saffron to keep crocodiles from stealing honey.”

Now we will move to Birds.

The following images all come from The Smithfield Decretals, a copy of Pope Gregory IX’s Treatise on Medieval Canon Law. This version is believed to have been created somewhere in France in the 13th century, and the illustrations were later added in England decades later.

Just in case your mind hasn’t been fully blown yet, the image above is that of a BIRD chased by two snails. 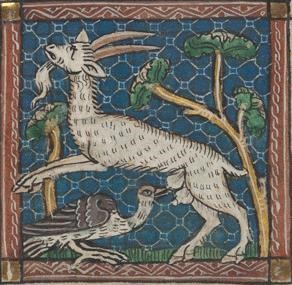 Here is another bird taking milk, from a goat (just in case you are wondering where the idea of “nightjar feeding on goats milk” come from)

We don’t know why, but apparently, Rabbits were brutal, and were always on two legs. 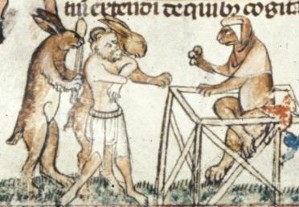 Not to talk of the hostility they had with man.

Apparently and hostility towards dogs too…

You will think that the easiest thing to draw will be a snake. At the very least, you can just draw any line and make your case. Right?

Well, apparently not. It is clearly stated, that was indeed a snake [Bibliothèque Nationale de France, Français 1444, fol. 258]. It also says snakes are scared of nudity, thus, one should go naked if confronted by a snake.

By now, I am sure you are reconsidering you respect of medieval artist, and having a lot of thoughts about the level of skill they possess.

The image of the goat above is NOT from the 13th century but from the 21st. In fact, I took this image 3 months ago in Kaduna State, Nigeria. It is a painting in an elementary school. Let’s forget about the spelling mistake for a second, and appreciate the mouth (or beak?). These type images keep me up at night. Why the coloration? And is there Goat II ?- I looked everywhere on the wall for the progeny of this goat but couldn’t find any. Honestly, it will be easier to argue that the Goat is wearing a Coat. But then, what will you say about the head ? A helmet?.

Most of the images used are from 1110-1130 English bestiary, and Images from Bodleian Library, MS. Laud Misc. 247. I would like to thank Fantastic Beasts for clarity on some of the images.